WandaVision is a Marvel-ous Superhero Series Like No Other

Calling all Marvel superfans: the Marvel Cinematic Universe’s latest brainchild, WandaVision, is a spinoff for the ages — whimsical, mysterious, poignant, and certainly a welcome change from your typical combat-heavy superhero narrative. Directed by Matt Shakman, the comedic mystery-drama miniseries charms its audience with a character study-style plot, inventive storytelling, and dazzling acting.

Based on Marvel comics and films and succeeding the events of 2019’s fan-favorite Avengers: Endgame, WandaVision follows Wanda Maximoff (Elizabeth Olsen) and the android Vision (Paul Bettany), two superheroes living an idyllic domestic life in suburban Westview as a happily married couple. Their life together mimics sitcom episodes from different decades in time, and the show observes Wanda and Vision as they attempt to fit into mundane society while amusingly trying to conceal their not-so-subtle superhuman powers. All is perfect in the two lovebirds’ lives — or so it seems. In actuality, Vision died in Avengers: Endgame at the hands of supervillain Thanos, leaving a devastated Wanda to unravel. Accordingly, bizarre happenings begin culminating in Wanda and Vision’s all-American bliss, and the mystery of Westview’s origin, how the two superheroes ended up living a sitcom-esque life, and whether anything exists outside of Westview begins to loom large in the couple’s dreamland.

The majority of superhero projects in the Hollywood sphere, Marvel productions included, heavily feature superhero clichés — action-packed fight sequences, dramatic training montages, the good guys versus villains plotting world domination trope — the list goes on. Interestingly enough, WandaVision strays from these common formulas, instead shifting the spotlight onto its characters and their emotional depth. Wanda in particular is a shining representation; the series brilliantly captures Wanda’s grief in the aftermath of Vision’s death as she spirals out of control. WandaVision’s exploration of Wanda’s emotional fragility in both her creation of an alternate fantasy world as a coping mechanism and her refusal to give it up, combined with her journey towards accepting the reality of Vision’s fate, makes Wanda a complex and layered character beyond typical female superhero archetypes, who lack emotional depth and are often painfully reduced to one-dimensional love interests. The topic of grief and how humans deal with such a potent emotion illustrates a real-life coping process many can relate to and is what sets WandaVision apart from the average superhero TV series. 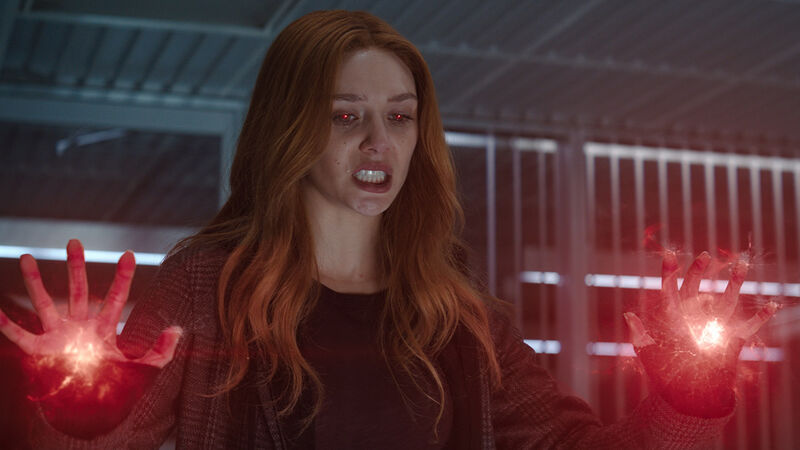 The recurring topic of grief manifests itself in Wanda’s struggle to accept Vision’s death.

WandaVision further stands out as one of its kind with its creative narrative structure. Rather than simply cooking up a humdrum modern fantasy realm, the show’s inclusion of sitcom-style episodes and homages to iconic TV programs like I Love Lucy and The Brady Bunch frames Wanda’s denial of her reality in a unique and entertaining light. It’s worth pointing out that Shakman doesn’t hold back with mimicking classic sitcoms — the series’ carefully crafted efforts to stay authentic to its inspirations are evident in attributes like its vintage costume designs, lighting, aspect ratios, and color palettes accurate to the episodes’ respective time periods. WandaVision also impressively recreates nostalgic sitcom humor in its cued live audience laughter and its characters’ exaggerated goofball antics, such as a drunken Vision attempting to perform at a town magic show while trying (awkwardly) to keep his superhuman powers under wraps.

Vision performs in a 1960s magic show with Wanda’s assistance as he comically attempts to conceal his superhero powers.

The show’s pacing keeps its viewers wanting more at each episode’s end; while the series’ sitcom aspect is fun and lighthearted, Shakman keeps boredom from swallowing audiences whole by gradually revealing small unsettling clues each episode until the truth about Westview is revealed, such as the discovery of a red toy helicopter in an otherwise black and white setting. These tiny yet haunting signs (and sometimes references to previous Marvel productions) paired with the series’ scheme to not reveal too much at one time, unravel the show’s mystery at a perfect pace and keep audiences on their feet.

Unnerving clues sprinkled lightly in each episode, such as a red helicopter in a black and white setting, keep boredom from taking over.

Going hand in hand with WandaVision’s character examination and innovative story-framing is its star-studded cast’s portrayal of their roles and relationships. Olsen and Bettany’s dynamic onscreen chemistry, for instance, is nothing short of delightful. From Wanda and Vision’s teamwork as they use their powers to prepare a last-minute dinner for unexpected guests all the way to their tear-jerking final conversation before Wanda dismantles her fantasy, Olsen and Bettany’s playful quirky exchanges combined with their tender and intimate scenes together are the heart of the show, keeping audiences invested in Wanda and Vision’s charming romance alongside the core mystery. Each character’s comedic timing is spot-on; Wanda and Vision, along with side characters including busybody neighbor Agnes (Kathryn Hahn), deliver a number of memorable and quote-worthy quips throughout the show’s run, making audiences feel as if they’re tuning in to a genuine sitcom.

Wanda and Vision’s onscreen chemistry is enchanting and impeccable.

WandaVision’s only imperfection lies in its season finale;  the final chapter in the nine-episode series is, to put it nicely, anticlimactic and disappointing. What was a sweet build-up of Wanda’s emotional development, mystery, and conflict culminated in 42 minutes of largely superhero combat reminiscent of the all-too-familiar “final showdown” between hero and villain. While WandaVision is, at the end of the day, a Marvel TV series tying into superhero action films, the events of the finale feel uncreative and overdone. One can’t help wondering, considering the immense depth and creativity of the previous episodes, if the writers could have done more with its final episode and resolved the show’s conflict in a more interesting way, rather than inserting a slew of cliché superhuman air-fighting sequences.

What’s more is that, when it comes to Wanda’s character development, WandaVision’s finale is an exasperating hitch. While Wanda eventually has to let go of her alternate dream world and her fantasy of Vision, she also ends up manifesting her full powers, earning the title of Scarlet Witch, and returns nonchalantly to reality, seemingly unaware of how much suffering she’s put the residents of Westview through. Even with S.W.O.R.D agent Monica Rambeau’s (Teyonah Parris) assurance that her actions were partly justified, Wanda’s development and growth are undermined, as she doesn’t fully comprehend the extent of the harm she’s caused in sitcom land and somehow forgoes any sort of responsibility for her actions.

WandaVision’s finale is a compilation of uncreative combat sequences, making for an anticlimactic end to the series.

Although burdened by a disappointingly lackluster finale, WandaVision, fortunately, redeems itself with meaningful character studies, imaginative storytelling and gratifying pace, and the cast’s irresistible dynamic. Wanda’s complete realization and use of her powers are a fulfilling set-up of her character for future Marvel productions as the film franchise begins to enter Phase Four, which refers to Marvel productions scheduled for a 2021-2023 release. Needless to say, the series comes to television’s rescue with a creative heartfelt story of the beloved Wanda and Vision, all while keeping mystery and suspense at play in a beautifully fleshed-out plot.

WandaVision is available to stream on Disney+.

Despite its magic falling flat near its end, Marvel’s newest TV series WandaVision is altogether a work laudable for its emphasis on character depth, inventive storytelling and production, and enchanting acting performances.

Worth reading...
Gregory’s Big Band About to Make a Big Bang in the Jazz Community